Read more about our work and charism-

Sr. Sharon Horace
I am a Daughter of Charity of St. Vincent de Paul. I am on mission in Philadelphia, PA. 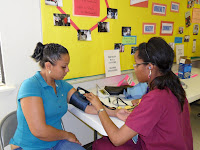 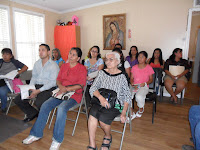 Summer has been filled with various activities at PJD. In June, children ages 5-12 participated in the vacation bible camp, Baobab Blast. Campers made sock monkeys in Kalahari Crafts, learned about following Jesus in Savannah Storytelling, and in Serengeti Science children made rockets and launched them with our homemade air rocket launcher. Area teens worked with the children in teaching the daily classes. They did a great job and the kids loved this year’s camp.

July held two large community events, a Health Fair and a Run/Walk through Cameron Park. Many people took advantage of the services offered at the health fair: blood pressures, cholesterol screenings, taking finger prints for children’s safety, and passports and identification cards from the Mexican Embassy. Students from the Regional Academic Health Center assisted PJD staff with many of the stations. The project held its first run to promote heath and exercise in the colonia. There were over 100 runners/walkers for either the 1 mile or 3 mile walk/run. Our youngest first place winners received bicycles and older winners won gift cards for 25, 50, and 100.00 to Academy Sporting good Store. The event brought the community together as they cheered runners on to complete their goal. Everyone enjoyed the time together and people are already asking when the next run will be held!

Now we are preparing for the majority of our classes that will start in September.

Off to a good start

This year's goal of working to cleaning up the colonia is off to a good start with 2 projects completed. Youth from the community recently designed and painted a mural that was hung on a local drive through store. The store's outside walls were rotten and were in need of repair. The owners agreed to let us paint a mural if we would supply the new wood for the walls. It was a win-win situation for both of us. The youth decided that they wanted to convey a message of coming together with love of others and our earth. Their painting certainly brightens the day of all who pass by it. It is a reminder of what our world can be if we all work together.
PJD has worked very hard to aquire street lights in the colonia. Since different electric companies work within the colonia, our staff negotiated with each company. They also got the approval of each property owner who would have a light placed on their property, which was no small task. Thanks to the dedication of Lupita Sanchez, Adriana Guerrero, and Sr. Phylis the project has been completed! PJD was able to financially support this important project through funding from the Marguerite Casey Foundation and the Daughters of Charity of the West Central Province.
Posted by Sr. Sharon Horace at 11:02 AM No comments:

With the beginning of the New Year PJD also saw a beginning of new ways of serving colonia. We are always trying to look at ways to meet the needs of those in we serve and we’ve begun to a couple new programs that are described below.
Clean up Cameron Park! One of the topics mentioned by both adults and children in the community is how much trash and junk is around the neighborhood. Yards become places where old and broken things like furniture, toys outgrown by children and unwanted tires end up. Beer cans and candy wrappers litter the side of the road and tall weeds grow through fences. Graffiti is painted on local tiendas, small neighborhood stores, and even wooden fences. This does not do much for the “curb appeal” or the beauty of our community. We’ve noticed that many who live here don’t have pride in their community. Therefore, PJD is working throughout its programs to teach about recycling and the dangers of unkempt yards. In the year to come, PJD hopes to help promote a community wide clean up and will work with those in the community to get abandoned lots cleaned up. A contest will also be held for those who wish to improve their yards.
(Below- mural of the community made by the children of the after-school tutorial program. The mural is entitled-Recycle! Keep our community clean.)

PJD has added a program that focuses on the whole family. So many times we have ourselves working with individuals who attend our programs and would like to make changes in their life. They return to their families only to find that it is hard to change when you don’t have support. Therefore, we are working with 17 families in the community. Each person in the family has agreed to be a part of the program and each family has set goals to obtain in the coming months. Our staff works closely with the families to guide, mentor, and support them in moving forward in their lives.